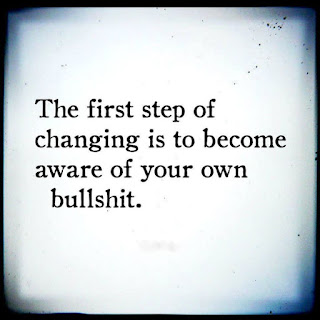 Its been a crazy few weeks to say the least.  I decided a few weeks ago that choosing me had to be first and foremost.  I broke off a relationship that wasn't doing my mental health any good. He's a good guy with a good heart, but just wasn't what I thought it was. I think I started to see bits and pieces of the OLD me in this person. Behavior of myself was reverting back to old me. And it wasn't a place where I wanted to go back to. That's the best way I can describe it.  So I told him I had to work on myself and do me rather than be in this relationship.  The truth was I just didn't see myself in 30 years growing with this person. I didn't see strength that I so badly need when it comes to a partner.  I need someone who can match me.  Who brings to the table the very values that I hold myself to. It doesn't mean he did anything wrong, it just wasn't going where I needed it to be.

I am a super strong women. I hold my own. And if there is anything that I have learned from past relationships is that I can't fix anybody, I can't be a savior, and I have a tendency to over power men that can't or aren't willing to truly grow themselves.  Every guy I have dated just doesn't click, doesn't have that same fire that I have.  It's hard to be a woman of strength. I overpower the men I am with because they, somewhere inside them, are broken. Which attracts me in the beginning... savior mode right? It a horrible attribution of mine. Read previous post if you want to know more about that. lol.  But in short, its my go to. I find men who are broken and I think if I save them, or whatever, then it shows I love them. But its a lesson that I finally have learned. This time I went so far into savior mode that it literally broke me down so far that I had nothing more to give in the end.

So where does that leave me on the love spectrum. Well, a couple weeks ago, out of nowhere, when I wasn't looking,  I was talking with a good friend of mine. We met about a year ago. We are both in the fitness field and hit it off right away....as friends of course. We talked about everything from day one like we had been old friends for years. I knew there was something more there but I was in a shitty relationship still and he was in and out of a toxic relationship himself.  So a couple weeks ago somehow our conversation turned flirty. We both ended up confessing that there was and always has been some sort of spark between us.  Here's the catch. He is back in this damn toxic relationship even though he moved out a few months ago he hasn't fully let this person go.

So here I am. Kind of the other women and just sitting here waiting. And I feel like a damn fool. I swear if its one things its another right?  This man is amazing in so many ways, but guess what? He doesn't even realize just how amazing he is, at least not currently. Can you see where this is going? Yup, right back into savior mode. This time though its different because I have seen this man be so full of light and strength. He has conquered things unimaginable that I won't go into detail about but seriously huge things, trauma that he has managed to work through and come out the other side.  He is strong, capable, funny, smart, truly on my level on so many things.  But.... he is stuck in his situation because he chooses to be stuck, and that to me is weakness. I am not judging the situation, I have been there before, stuck in a relationship that I knew for years I had to get out of.    So what did I start to do? I started trying to remind him of all his great qualities, I tried to build his confidence back up.  And what I have learned in my 43 years of life, at least in my experience, is nobody can do that for you. Nobody can make you realize your true worth except yourself. Nobody can make you truly find your ability to rise again. You have to find that in yourself.  Its like you have a heavy Deadlift right.... only you can position yourself just right, only you can place your feet firmly on the ground, and only you can lift that fucking weight. Life is exactly like that.  Maybe this is why I love deadlifts and lifting weights so much.  Its finding your power not anybody elses.  You can be told maybe technique, tricks, what worked for them... but in the end it is ONLY all about YOU. Here's the kicker though.... you will fail. Either by trying to lift to heavy of weight or if you haven't learned the steps you take prior.  THAT is life. Find the balance, find your footing, and conquer whatever is in front of you regardless of the outcome. If you don't lift what you were hoping to, then back off, and start from the beginning and take baby steps to get there.  Nobody can just walk up with out skills, with out some sort of training and lift something that heavy. You have to start from somewhere.

I am starting over again.... on so many levels. But what I am realizing as I write this that I have been looking at this "friendship" from the wrong perspective.  If its meant to be, it will be. Nothing I do or say right now even matters because he isn't fully detached from this other woman.  I need to let go, work more on myself, take baby steps, find my footing, learn and grow, before giving this guy everything I have or help build him up because I too am a work in progress.  I have to back off and realize that if he really wanted a healthy relationship with me instead of the toxic one he is in he would...but instead he is making his choice to not cut things off and there isn't anything I can say or do to change that.  Regardless of mutual feelings, he is making his choice.  And maybe when, if, he ever finds his own strength, I will still be here. Who knows. But I have to fight my own battles before putting any energy or power into someone else, doesn't mean I won't be a friend, but defiantly means I won't be more.  We all have our demons. This is one of mine. And I am slowly learning my bullshit.

Popular posts from this blog

July 07, 2021
Almost 10 months ago, I moved my daughter and I to North Carolina from Michigan. Starting about 9 months before the move life took a twist. My daughters amazing Dad passed away suddenly. Then Covid-19 hit. I fought every day with my kid, we were both spiraling down into what felt like the deepest pit of anxiety and depression.  I won't go into all the things that happened in between those hard months. But it was too much.  Then one day, about 3 or 4 months before moving, it came to me.  I remember having a full out fight with my daughter. She was lost. I was lost. and the combination wasn't good.  And I remember staring at her and having this overwhelming surge of emotions.  And that's when it starting to hit me...I can't, we can't live like this anymore.  I had said the unthinkable to her, something straight out of my parents book... "if you don't like it here, you can go live somewhere else".  Regret hit me as soon as I said it, because I knew that t
Post a Comment
Read more

February 15, 2021
I am part of a group of amazing women on facebook lead by an even more amazing woman Laura Fudge....if you don't know her you should.... You can follow her here:  Instagram  or her  Website  .   She asked us to write a few things down.... and it really started my thinking wheel. Here are my answers.  My main values: I have a long list of values that have grown especially as i get older and wiser...to name my top few id have to say: authenticity, empathy, strength, and respect. Something that changed your life: So many things that I have conquered in my life molded me to be who I am today. I could write a book on how each experience changed my life and guided me onto the path I am currently walking. To stay more current, I would have to say, the sudden death of my daughters Dad a year ago. It changed so much for me. My outlook on life and how precious and short it is made me realize I wasn't stuck in my situation. It almost prepared me for the downfall of my business due to c
Post a Comment
Read more

What story in your life is stopping you?

September 09, 2020
I have done many things in life that I can truly say I am not proud of, and just as many things that I can full heartedly say I am proud of, but not one thing in my lifetime of achievements and challenges amounts to the pride I have than being where I am in my life now and knowing what I have had to endure to get here.   Life isn’t just a single path we are coasting on.  It’s a web of intricate design that we must choose with our hearts, our soul and our spirit to guide us.  Life doesn’t just happen by accident, it's full of reasons, if we choose to open our eyes, our minds, our soul and learn to navigate the whys, we come to a better understanding that we all have purpose in this world, even if it's not clear in that very moment.  It's our story, it's constantly changing, like water, and we must be open to the ebbs and flows.  We must learn and then teach others the understanding that Just because one chapter in your story guided you down a path, it is never permanen
Post a Comment
Read more